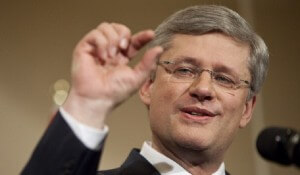 Canadian Prime Minister Stephen Harper speaks to the media at a press conference in Calgary, Alberta, May 3, 2011. Harper won re-election Monday at the head of a majority government, the first for his Conservative Party since 1988, television projections showed. In a ground-breaking election full of firsts, the left-leaning New Democratic Party (NDP) was on course to surge past the Liberals, which governed for most of the last century, and become Canada’s official opposition. AFP/GEOFF ROBINS/STR (Photo credit should read GEOFF ROBINS/AFP/Getty Images)